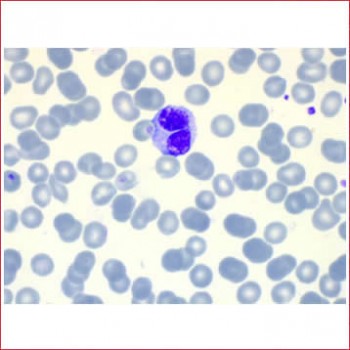 An image of an extension of peripheral blood smear, stained with May-Grünwald-Giemsa, is presented (figure 1). It is observed binucleated lymphocytes. These entities are constant and they are almost a exclusive feature of persistent polyclonal B lymphocytosis (LBPP). Morphologically, the lymphocytes are medium-large in size with a moderately condensed, bilobed nucleus, with a broad and slightly basophilic cytoplasm, as seen in the image. In addition, it is also common to observe the presence of lymphocytes with a central incisure nucleus, more or less deep that represents the different evolutionary stages prior to the binucleated lymphocyte (figure 2).