PARASITOSIS OF A TRAVELLER RETURNING FROM A TROPICAL ZONE

The authors present an image composition in which, the lower right is a 400X fresh stool examination, where an elongated egg of about 80x45 μm without vitelline membrane, with a very irregular and mamelonated thin covering and cytoplasmic mass with amorphous and refracting granules is showed, being identified as an infertile egg of Ascaris lumbricoides. In the upper part of the image, an adult nematode of slightly pinkish color, about 20 cm long, 4 mm wide and with a slightly curved caudal end (left lower part) is presented, being identified as an adult male of Ascaris lumbricoides. 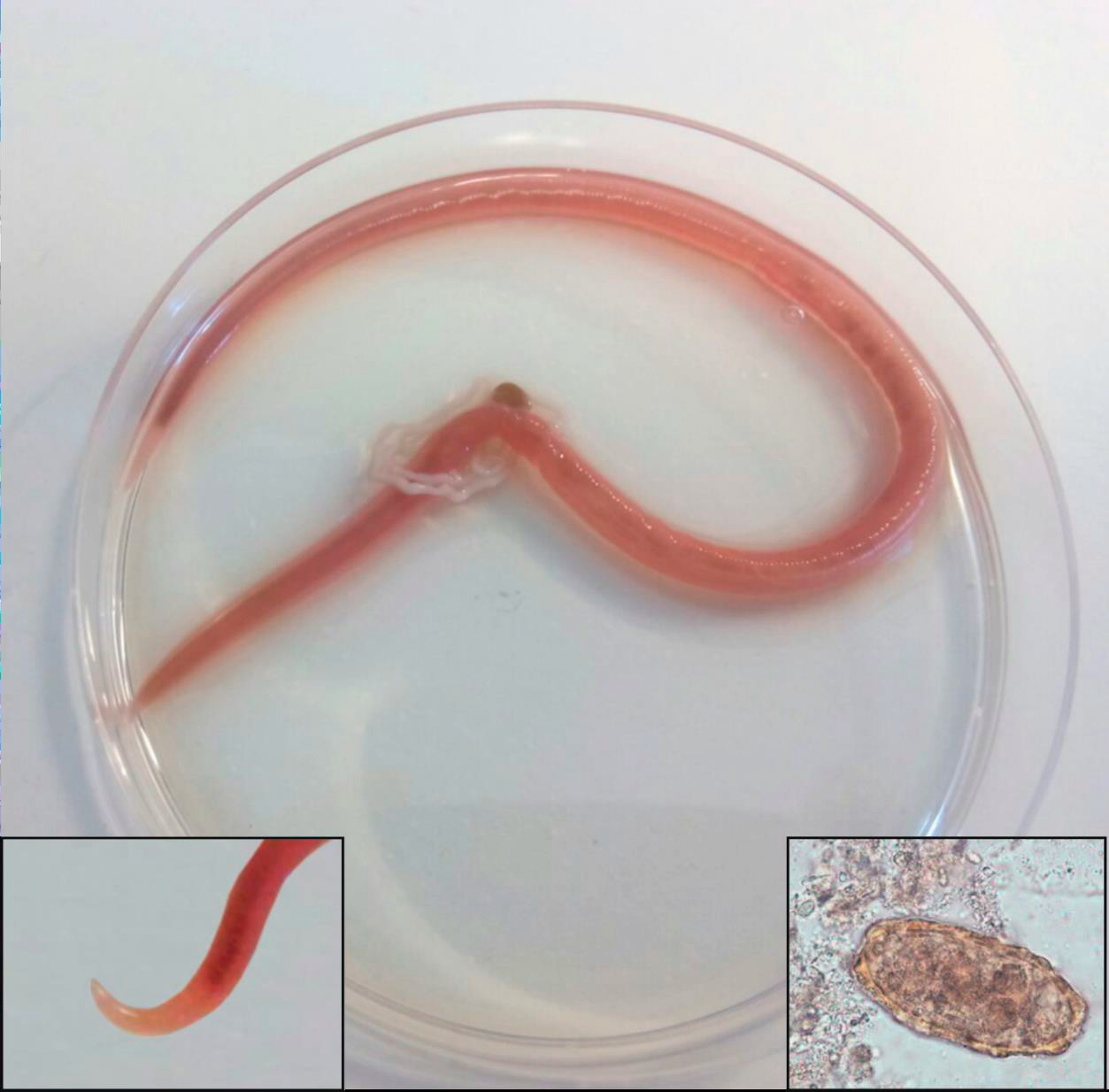 Figure 1. Macroscopic examination of adult Ascaris lumbricoides with curved posterior end (detail lower left).
Lower right part: 400X fresh examination of an unfertilized egg of Ascaris lumbricoides
Both parasitic forms are isolated from a 37-year-old male who comes frequently to the Emergency Department for abdominal referred pain of a month of evolution. The patient indicates trip to a rural area of Peru 4 months ago with ingestion of untreated water.

The exploration revealed soft abdomen with pain located in the right hipocondry radiating to the back. Medical history don´t revealed any important finding, except the presence of progressive eosinophilia since the first time he came to the Emergency Department (See table).

One day after admission, a parasitological study was performed in stools, where an infertile egg of Ascaris lumbricoides is observed.
Knowing these microbiological findings, a treatment with oral albendazole 400 mg/day for a week was started. After seven days of admission, to worsen liver profile, it was performed an endoscopic retrograde cholangiopancreatography, extracting an adult form of Ascaris lumbricoides from bile duct.

Ascaris lumbricoides is the most common intestinal nematode in the world, affecting around one billion people1. It has a high prevalence in the tropical and subtropical regions of the underdeveloped or developing countries of Africa, Latin America and Asia2-3.

Ascariasis is a cosmopolitan parasitosis, more frequent in populations with socioeconomic and health deficient conditions1-2-3. It is very rare in developed countries, with documented cases of migrant population or travellers returning from endemic areas3. Most cases are usually asymptomatic, with a good evolution especially in the larval stage2, but may have complications when ectopic migration occurs, so that both the adult and larvae invade the bile or Wirsung ducts causing cholangitis, pancreatitis or liver abscesses2. Another complication due to the high concentration of parasites is the perforation of the intestinal mucosa, which may cause peritonitis, appendicitis or intestinal obstruction. Pulmonary infiltrates or asphyxiation by windpipe can occur when the concentration of helminthes is located in airways1.

The prepatent period of ascariasis is two to three months4.

The gateway of the parasite is direct ingestion of L4 larvae or contaminated food with embryonated eggs. The following outline summarizes the life cycle of Ascaris lumbricoides. 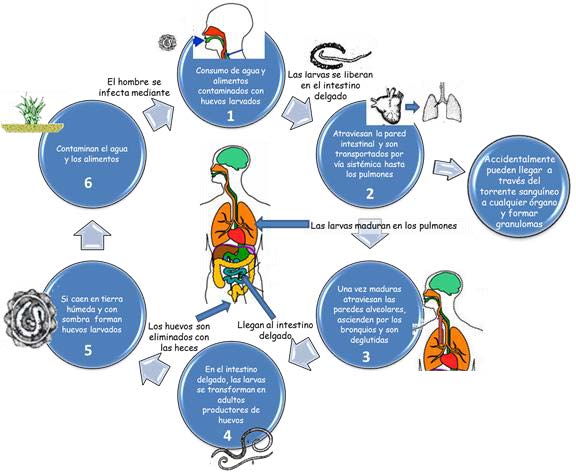 It is possible to develop Löffler syndrome or eosinophilic pneumonia during the larval pulmonary passage, which are showed with irritation, coughing and breathlessness5.

Presence of helminthes can be detected by imaging techniques2, but usually their identification is done by direct observation of macroscopic and microscopic nematodes in adult, larvae or eggs phases4.

The treatment of choice is albendazole, mebendazole or ivermectin and pyrantel pamoate or nitazosamida alternatively. Spontaneous parasite elimination occurs in 80% of cases of uncomplicated biliary ascariasis. Cholangiopancreatography is indicated when a complication, clinical deterioration or when drug treatment fails is suspected2. In our case, we combined treatment with albendazole and cholangiopancreatography.