Figure 1. Electropherogram of a healthy male studied to rule out the carrier status of the CGG triplet expansion in the FMR1 gene after the identification of family history.

Figure 1, electropherogram of a healthy 53-year-old male studied to rule out the carrier status of the CGG triplet expansion in the FMR1 gene after the identification of the premutation in this gene in his three siblings. AmplideXTM FMR1 PCR Reagents (Asuragen) with CGG Repeat Primed PCR and analysis of the fragments using the ABI 3130xl sequencer and GeneMapper 4.0 software were used in this study. The Triplet Primed Repeat-PCR (TP-PCR) is a modification of the PCR, specific for the study of repeated areas.
In this case, the assay uses three primers: one of them labeled with the fluorochrome FAM ™ flanks the sequence of variable length trinucleotides; another hybridizes with the CGG repeats region and includes a 5 'sequence common to the third primer, which is the one that amplifies the mixture of products obtained with the previous primers. In this way, an amplification occurs from multiple sites, as many as repeats in the allele. The fluorescently labeled locus-specific primer gives specificity. The result in the electropherogram is a characteristic fluorescent peak ladder, in which the number and morphology of the set of peaks is indicative of the number of triplets detected. The analyzed sample presents several alleles in mosaicism in the premutation range (PM; 118 +/- 5, 141 +/- 5, 160 +/- 5) and an allele of >200 CGGs in the complete mutation range (CM) in the FMR1 gene. In this case, the absence of symptoms in the patient stands out despite being a carrier of a CM allele and a mosaic of several PM alleles. Because of this finding, the genetic study was completed with the estimation of the percentage of methylation of the alleles studied. In the genetic counseling, it was indicated that, despite currently having no symptoms, he should be monitored by Neurology due to the probability of developing the fragile X-associated tremor / ataxia syndrome (FXTAS). Thus, the importance of an early diagnosis lies in the possibility of an early and adequate therapeutic management together with a correct family counseling that includes the choice of the appropriate reproductive decisions. In this case, all the patient's daughters will inherit the PM with a number of CGGs similar to their father, but none of his sons will inherit the PM or the CM allele. 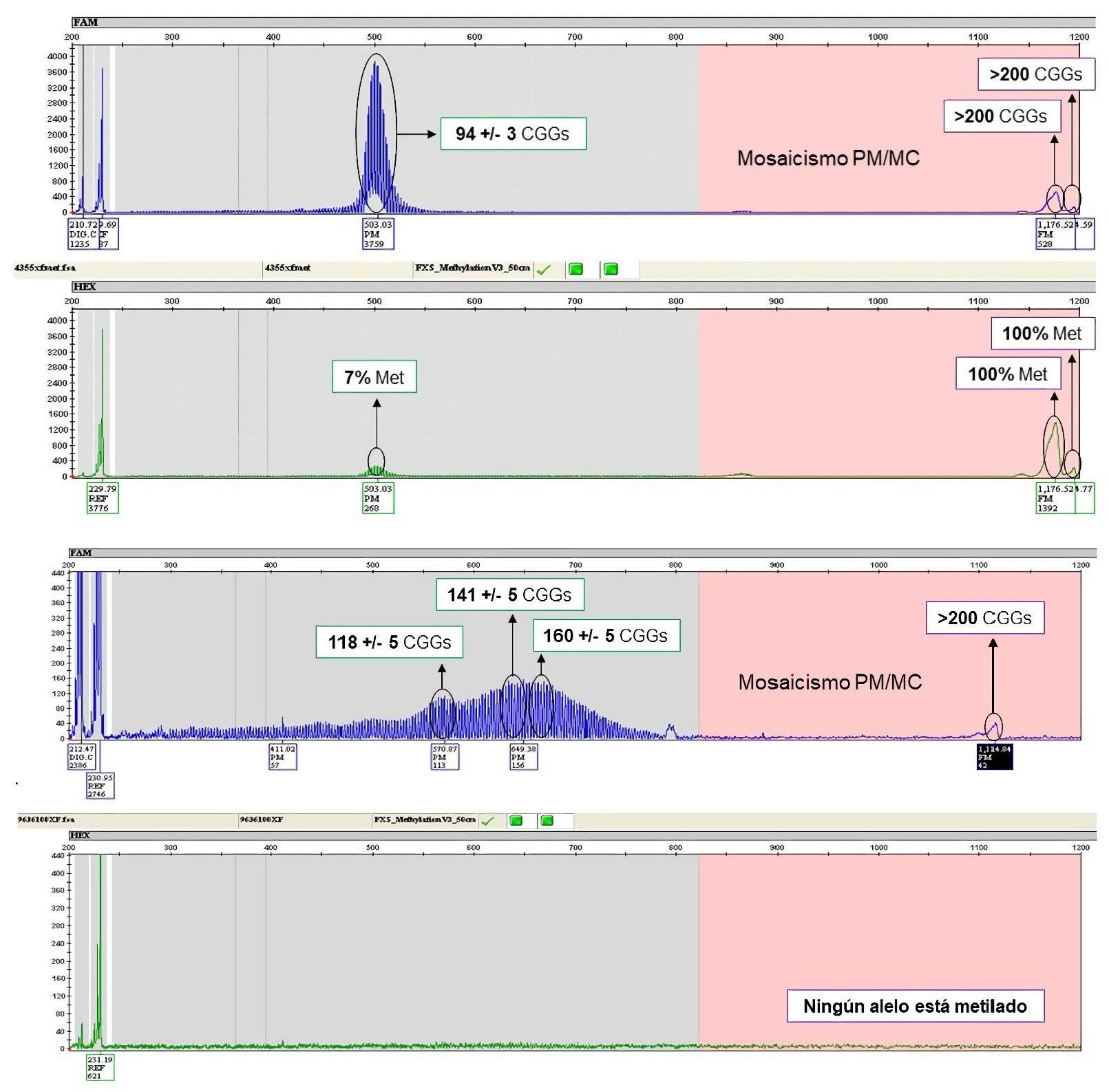 Figure 2. Electropherograms obtained by analysis with the AmplideX FMR1 mPCR Kit (Asuragen). Estimation of the percentage of methylation of the alleles in the range of PM and CM of the patient (upper) compared to those of another individual male with PM/CM mosaicism (lower). It is observed that the PM alleles and especially the CM alleles of the patient are not methylated, unlike what happens in those of the individual with whom it is compared, where the CM alleles are 100% methylated. It is believed that this fact could justify the absence of symptoms of cognitive impairment associated with the fragile X context in this patient.

Fragile X syndrome (FRAXA, MIM # 300624) is the most common inherited cause of intellectual disability and autism spectrum disorder. Affected patients generally present, from the second year of life, severe behavioral disturbances such as hyperactivity, impulsivity and anxiety, along with language difficulties. Physical manifestations include prominent and spread ears, elongated face, flat feet, joint hyperextensibility, thin skin, and macroorchidism during puberty.
FRAXA is a dominant X-linked disorder with incomplete penetrance caused more than 98% of the time by the expansion of cytosine-guanine-guanine trinucleotides (CGG) in the promoter region of the FMR1 gene (Xq27.3) (NM_002024.5) which leads to methylation, transcriptional silencing and reduction of the expression levels of the FMRP protein, involved in synaptic maturation and plasticity. Two other genetic diseases are caused by premutation in the FMR1 gene: the early ovarian failure syndrome associated with fragile X (FXPOI, MIM # 311360) and FXTAS (Fragile X Tremor/Ataxia Syndrome, MIM # 300623). The normal range of repeats present in alleles of healthy individuals is 6-44 CGGs, alleles with 45-54 CGGs are called intermediate or "gray zone", those of 55-200 are considered PM and those with >200 CGGs present the CM. The prevalence of CM associated with FRAXA in the general population is estimated to be 1: 5000 in men and 1: 4000-8000 in women, while that of PM alleles varies between 1: 250-813 in men and 1: 110-270 in women.


Unlike CMs, which lead to epigenetic silencing f FMR1 by histone methylation and modification, PMs are associated with excessive gene transcription, resulting in FXPOI syndromes in women and FXTAS in both sexes. Approximately 40% of males PM allele carriers and 16% of females  ≥50 years old will develop FXTAS, a neurodegenerative disorder associated with intentional tremor, cerebellar ataxia, neuropathy, and cognitive impairment. Additionally, 20% of premuted women will develop FXPOI. Other symptoms such as depression, sleep apnea, hypertension, anxiety, restless legs, migraine, fibromyalgia, and hypothyroidism are more common in premuted individuals.

The existence of a correlation between the FMR1 methylation profile and the clinical phenotype expressed by patients affected by these syndromes has also been described, according to FMRP levels. Thus, milder clinical forms are related to the complete lack of FMR1 methylation in men and to a percentage of cells with the normal FMR1 allele on the active X chromosome >0.75 in women, although it is rare for individuals with CM to remain asymptomatic.

Finally, it has been found that the expansion of CGG repeats increases the instability of that region, being able to favor the existence of "size mosaicisms" defined as the presence of alleles with different numbers of CGGs in the different cell types and "methylation mosaicisms” in which some cells contain hypermethylated FMR1alleles and other unmethylated. In the case of women, the presence of adenine-guanine-guanine (AGG) repeats between CGG triplets has been shown to increase the stability of the region and decrease the risk of CGG expansion in the offspring.
REFERENCES