A 42-year-old male patient with myelomeningocele and hydrocephalus resolved in the perinatal period by ventriculoperitoneal shunt and cerebrospinal fluid valve implantation.

The patient presents neurogenic bladder and sphincter incontinence, a very common sequel in patients with spina bifida. This was attempted to be resolved by implanting an artificial sphincter, which was finally inactivated due to bladder emptying problems.
In 1999, Mitrofanoff´s surgery (construction of a channel that connects the bladder with a stoma in the abdomen using part of the intestine) and bladder enlargement were performed, which led to recurrent urinary infections, reflux nephropathy with proteinuria, and multiple bladder stones. In 2006 he underwent surgery for bladder lithiasis and in 2018 a bladder litholapaxy was performed.

In early 2020, a left nephrostomy was performed. He underwent surgery again in June 2020, with the implantation of a double J catheter and replacement of the urinary catheter to a larger caliber one. During the process, a percutaneous nephrolithotomy and cystolithotomy were also performed to extract multiple stones in the neobladder and a left pseudocoraliform stone detected on Computed Tomography (CT).

A stone composition study was carried out after pretreatment of the samples. The stone is fractured in an agate mortar and then a representative fragment of the sample is selected, which is pulverized and homogenized with potassium bromide (KBr). Said mixture is compressed with a hydraulic press, obtaining a tablet that is analyzed by IR spectrophotometry.

Numerous stones with a total weight of 21.6 g were removed from the bladder. These stones were in the shape of a pebble, smooth and shiny brown surface, and white inside. Their consistency to compression / fragmentation was intermediate. The spectrum obtained by IR shows a composition of calcium phosphocarbonate (FFC). 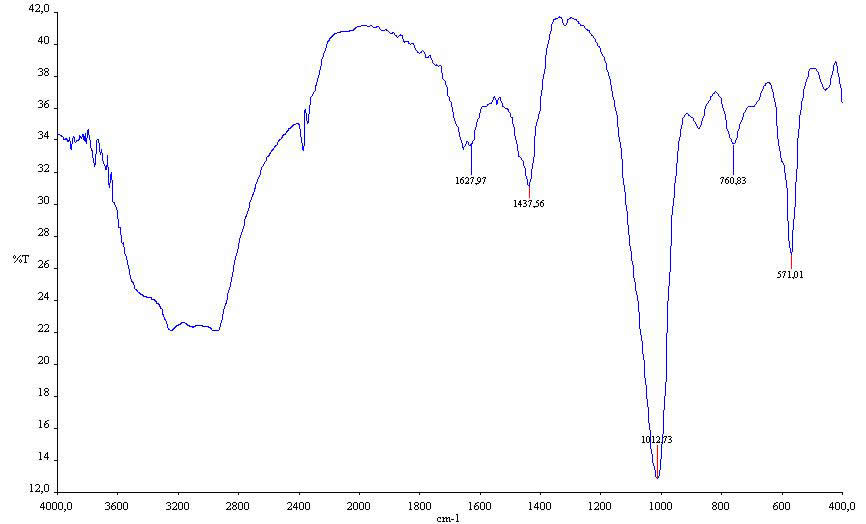 Both types of stones are formed at pH> 6.5 and are recurrent since they are formed as a consequence of low urodynamic efficiency in low cavities, as is the case of the neurogenic bladder. In addition, those compounds by FAM are a direct consequence of recurrent UTIs by ureolytic bacteria that increase the concentration of urinary ammonia.