Figure 1. Radiographs of a 2-year-old patient who was admitted to the Pediatric Surgery Service due to the ingestion of a 12 mm diameter lead fishing sinker that was not expelled after inducing vomiting.

In the first radiograph, (figure 1A) the radiopaque image of the sinker is visualized in the gastric chamber, and its course through the digestive system in the subsequent images: (figure 1B) jejunum, (figure 1C) ileum, (figure 1D) ileocecal valve, (figure 1E) transverse colon, (figure 1F) transverse colon-hepatic flexure and (figure 1G) cecum-ascending colon, from where it was extracted three days after the ingestion with a polyp retrieval net(figure 1H). During admission, the patient did not present complications and she remained asymptomatic with good condition. Laxatives, a high-fiber diet and rectal enemas were administered without achieving spontaneous expulsion of the object. No pathological findings were evident in the cecum, right colon, transverse colon, descending colon and rectum-sigmoid mucosa on examination.
The maximum concentration measured was 22.2 μg/dL, matching the sinker transit through the gastric chamber and arriving in the small intestine (figure 2). In the following days, lead levels decreased slightly until a value of 17.8 μg/dL prior to the sinker removal. In the last control, the Pb concentration was 3.7 μg/dL after six months. Before making the first determination of lead levels in blood, the National Institute of Toxicology and Forensic Sciences (Madrid, Spain) was contacted, who recommended administering an irrigation with polyethylene glycol and maintaining a high-fiber diet to promote the spontaneous expulsion of the foreign body. No lead chelators were administered because the blood lead levels did not reach 45 μg/dL. In cases of lead poisoning, it is recommended to administer D-penicillamine when blood lead levels are between 45-70 μg/dL and dimercaprol (British anti-lewisite, BAL) with edetate calcium disodium (EDTA CaNa2) when they exceed 70 μg/dL. Lead levels in whole blood collected in Vacutainer tubes with sodium heparin (Greiner Bio-One, Kremsmünster, Austria) were determined by inductively coupled plasma mass spectrometry on the NexION® 2000 equipment (PerkinElmer, MA, USA). Thallium (Tl) was used as internal standard (commercial standard Tl 1000 ppm, VWR Prolabo Chemicals, PA, USA) at a concentration of 10 μg/L in the calibration curves, controls and samples. Lead concentrations tested in the calibration curves (commercial standard Pb 1000 ppm, PerkinElmer, MA, USA) were 0.5, 1, 2 and 5μg/L and Lyphochek® Whole Blood Metals (Bio-Rad Laboratories, CA, USA) was used as internal control material. The patient's lead levels were determined using 100 μL of whole blood samples and 50 μL of internal standard were diluted in 4850 μL of a 1% HNO3 solution. The laboratory contributes to the OELM (Occupational and Environmental Laboratory Medicine) International External Control Program. 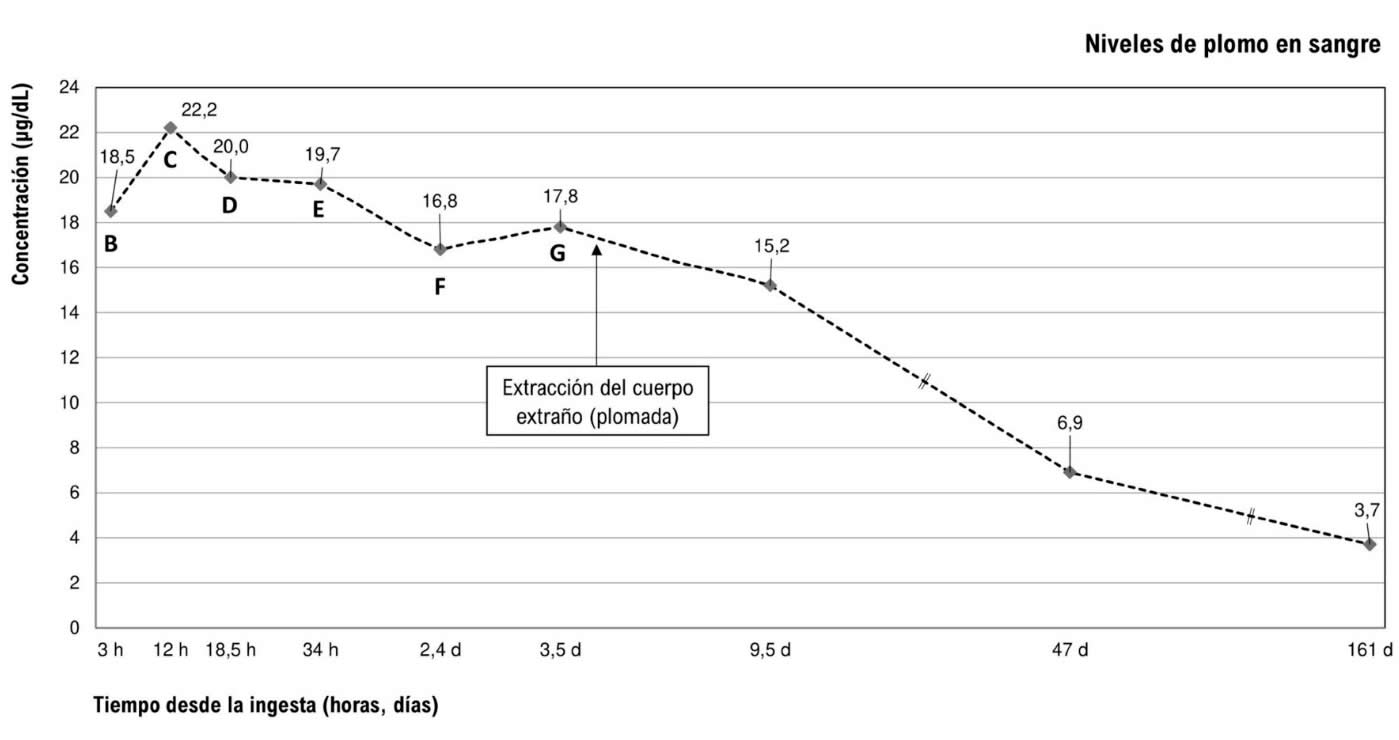 Figure 2. Lead (Pb) levels in whole blood (μg/dL) of the patient during admission and after extraction of the sinker
Poisoning in childhood account for about 0.3% of pediatric emergencies in Spain, most of them accidental, although cases related to child abuse or self-harm are also recorded, especially during adolescence. Poisoning in children under 6-7 years-old are usually involuntary, it occurs inside the familyhome, the poison ingested is known, and family members or caregivers take the children to the health system immediately when the patient is asymptomatic, with a good prognosis. The role of the clinical laboratory in these cases is focused on the diagnosis of intoxications that endanger human health. In the case of lead, it can enter the human body such as Pb2+ through the respiratory or digestive systems, and then accumulate in different organs and tissues causing or not episodes with acute symptoms, mainly on the nervous, renal and hematopoietic systems. In general, symptoms caused by the binding of lead to erythrocytes and sulfhydryl residues of proteins rich in cysteines are nonspecific, requiring the analysis of their levels, preferably in blood. Lead excretion rate is low, and it tends to accumulate in bone where it replaces calcium in the process of bone mineralization.

Until 2012, the North American Center for Disease Control and Prevention (CDC) established the limit value for lead in blood of 10 μg/dL (level of concern) which was considered that it could cause toxic effects in children. After that year, new recommendations stopped using the term “level of concern” arguing that no concentration of lead in blood could be considered safe. Instead, the CDC switched to using the 97.5th percentile of the blood lead distribution of children ages 1-5 from the National Health and Nutrition Examination Survey (NHANES) as the cut-off concentration to identify children with blood lead levels that are much higher than most children's levels, and who should be checked regularly. The current reference value based on NHANES data from 2007-2008 and 2009-2010 is 5 μg/dL, but there are cases where even lower levels have been clearly and repeatedly associated with poor behavioral and neurocognitive development. Therefore, acute lead poisoning, without a risk-free blood lead limit, must be closely monitored with special attention to childhood cases that could result, depending on the source of contamination, a lead absorption rate up to 4- 5 times higher than in adults.