Figure 1. Sulphadiazine crystals with wheat sheaf-shaped with eccentric binding morphology corresponding to the first urine sample sent to the laboratory (a) and the second urine sample (two days later) (b). Pictures at 20 and 40 increases.
A 49-year-old male HIV positive patient came to hospital for sudden impairment of his writing capacity of new onset without other associated symptoms. A cerebral nuclear magnetic resonance was performed, showing a space occupying lesion in the right temporoparietal space with cortical involvement, ring enhancement and associated perilesional edema. He began oral corticosteroid treatment and became asymptomatic.
Given the personal background of the patient differential diagnosis was made presuming an infectious origin. The serology for Toxoplasma gondii showed positive IgG, negative IgM along with negative DNA in CSF. Previous serologic results were not assessed because patient came from another hospital.

Corticosteroids were removed gradually and empirical treatment was initiated with pyrimethamine and sulphadiazine for probable cerebral toxoplasmosis.

Urine samples were analysed in the laboratory. Microscopic study of the urine sediment showed the presence of pharmacologic crystals in all the microscopic fields examined (figure 1).

Regardless of the form of the medication, it is excreted by the kidneys. Its solubility depends on urinary pH, being insoluble in acidic urine. Under these conditions the drug can crystalize and cause acute renal failure (approximately pH 5.5).

To prevent the crystallization of sulphadiazine it is essential to maintain adequate hydration and alkalinize the urine. In addition, it is recommended to avoid hypoalbuminemia because it increases the free fraction of the drug favoring crystalluria. 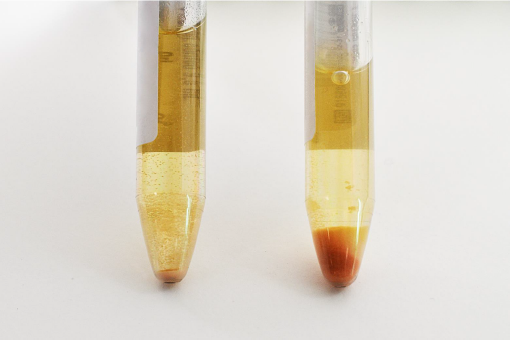 Figure 2. Urine samples after centrifugation. First urine sample (left side) and second urine sample (right side).
First urine sample had a pH of 6 with lots of sulphadiazine crystals. Patient had normal renal function. We informed the clinician and the patient was monitored with a second urine sample after two days. Second urine was brown colour and turbider in comparison with the first urine. Moreover the urine sediment was quite more important (figure 2). Sulphadiazine crystals were bigger comparing to the first urine. Urinary pH and patient renal function was unchanged. Despite this, patient started early treatment with intravenous NaHCO3 as prophylaxis to avoid an episode of acute renal failure in the following days.