Figure 2. Cannibalism and cell in mitosis. In the figure, a cell mitosis can be seen in the upper central part, accompanied in the lower right part of the figure by multiple cells in which cannibalism can be observed. (Pleural fluid smear. Quick panoptic stain. 600x). 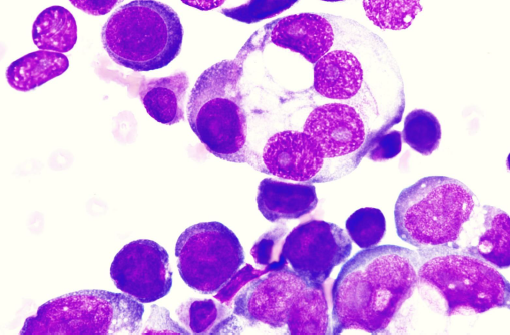 Figure 2. Cannibalism and cell in mitosis. In the figure, a cell mitosis can be seen in the upper central part, accompanied in the lower right part of the figure by multiple cells in which cannibalism can be observed. (Pleural fluid smear. Quick panoptic stain. 600x).
Cellular cannibalism, also called entosis, occurs when a cell surrounds, kills and digests another. The causes and mechanisms involved in this process are not well known, but they have been associated with tumour cells due to their ability to proliferate without the extracellular matrix and their high rate of division and production of mitotic cells1. The mitotic figures observed in some types of fluids of neoplastic origin are produced during cell division due to the activation and deactivation of the cell cycle regulatory proteins. Cell cycle deregulations are closely related to theappearance of cancer2. Tumour cells accumulate mutations that support their uncontrolled proliferation and increase the number of mitotic cells that can be visualized by microscopy3 (figure 2). Therefore, like cannibalism, mitosis is often observed in fluids of neoplastic origin (figure 2), properties that have been suggested as a mechanism of tumoral advantage for survival in low adverse nutrient conditions3.

The images presented belong to the pleural effusion of a 62-year-old woman. The patient presented two and a half years of evolution of a stage IV ovarian carcinoma treated with multiple chemotherapy lines.

Due to the clinical evolution of the patient with multiple pleural effusions and ascites, an evacuating thoracentesis was performed. A pleural fluid sample was sent to the clinical analysis laboratory for cell and biochemical study. The obtained analytical results were leukocytes 809 /μL, total proteins 4,5 g/dL, fluid LDH 779 U/L and serum LDH 485 U/L, which suggested exudative origin, due to the elevated level of total proteins, above 3 g/dL, and the ratio of fluid LDH/serum LDH >0,6.

The microscopic observation showed a cellularity constituted mainly by non-blood cells, with intense basophilia, high nucleus-cytoplasm ratio, big size cells, grouped in nest formation and abundant cellular mitosis (figure 2). The sample was sent to the pathology laboratory to confirm the findings, and the cytological study revealed a marked nuclear pleomorphism compatible with papillary carcinoma, which confirmed the suspicion of pleural metastases.

Ascitic fluid was also analyzed due to the previous result in pleural fluid with similar findings. The patient was followed up by the oncology service, where multiple cycles of chemotherapy were administered. The patient underwent surgery in which a hysterectomy, doble bilateral anextomy, lymphadenectomy (bilateral pelvic and paraoptic), appendectomy and omectectomy were performed. Despite testing multiple lines of chemotherapy, surgical treatment and support, the patient presented a poor evolution and a progressive worsening resulting in exitus.